John Hempton and I have blogged extensively on the Ackman/Herbalife cage match, and based on my work, John recently wrote an excellent article on the changes that Pershing Square made to their NAV reporting. Oddly they made two back to back changes to their NAV reporting disclosure and have reportedly sent representatives to speak with some very ruffled investors about the matter.

"For the moment though Pershing Square thinks it is okay to - without prior notice - report on an eight day week. Sure they did it so they could modestly hide the fantastic performance on 30 September. But the motivation is not the issue here.
Having an eight day week opens Bill Ackman up for allegations of deception - allegations that Bill should neutralise immediately by reporting the interim data point as originally planned."

It's clear that not reporting the -$800M AUM on Tuesday (the dead body), was achieved by modifying the NAV reporting schedule and guidance (the weapon), but the motive that Pershing has offered really doesn't make all that much sense, at least not on it's surface because there was no logical motive, other than saving face.

Pershing claimed that back-to-back NAV reports could help detect changes in their portfolio and that people could front run or disadvantage them. I think Pershing's claim is REALLY a stretch. Literally, I was able to predict within 0.1% what their numbers were going to be the night before they were scheduled to release their NAV, so portraying that back-to-back NAV the following day was somehow disadvantageous really does not fit with their defense.

Back-to-back NAV reports alone could help you determine that a change has been made, but it wouldn't allow you to detect WHICH change was made. For instance, we can also predict based on last Tuesday's weekly NAV's Pershing released that a change has occurred.

Whoopdie-doo. We know there's a change but it's not that informative. We don't know what they sold, what they bought or what they bought back. There was a sharp increase in Herbalife the days that Valeant was down, and it would be tempting to infer that Pershing partially covered their Herbalife short, but as one investor said, "Bill Ackman is not in the business of buying back Herbalife".  I agree that it doesn't appear that on a August to September basis Pershing did not reduce their exposure to Herbalife; if anything they partially increased it, but the supporting data is inconclusive. The only other data we get is what the firm's L/S exposure is with a partial breakdown by market cap. That's not super helpful even though you can detect a significant reduction in the firms long large cap exposure while simultaneously increasing their long midcap exposure. Interesting, because you know what their LC holdings and MC holdings are. Although this 6% change could be an indication that they sold something down while building another position it's a data vacuum so it's hard to make any conclusions.

A couple other curious things occurred in September compared to August that may help us determine Pershing's motive for the NAV sliming.

Pershing eliminated the "undisclosed position" entry from their report.

They also injected some new language in their footnotes. (Blackline changes below) 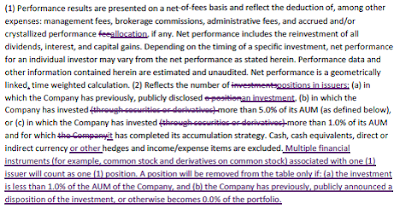 I'll let you parse the minor changes but there seems to be a long addition at the end there. Taken in aggregate with the disappearance of the "undisclosed position" sector, as well as the fact they've maintained 12 positions it could indicate a few potential changes
If it isn't some new hedge and they decided to build a new position, there isn't much to be said at this point. We only know the net delta on performance is ~$165M and by their own disclosure guidelines (if they honor them) it would need to be 5% of AUM or more to be disclosed, so we can determine that if it is in fact a new position that they are so sensitive about, that the acquisition can't represent more than an $825M investment as of last Tuesday because they hadn't declared it. We could also determine that if it was a new position it would have to be down at least 20% over that interim week to drag down performance by over 100bps. Unless we see a new 13-D, or other disclosure from Pershing, it's hard to say which one it is, although I'm leaning toward a Valeant hedge, just because it sounds more fun.

There is a separate but related story that also helps highlight why Pershing may have been so sensitive about reporting the NAVs the way they did. Hypothetically if they disclosed that they hedged Valeant(or any other company in their portfolio), this somewhat undercuts their projected confidence in the company and if word gets around that Valeant's biggest champion is losing confidence, it could put serious pressure on the stock and thus serious pressure on Pershing's holdings, and thus serious pressure on PSH shares, during a period of serious pressure that already exists. Pershing Management has about 3% of the PSH vehicle and is subject to a 10 year lockup, so P&L fluctuations aside, it's not like they could realize any gains by tinkering with the NAV values, right? Actually wrong. According to Pershing's own financial reporting, management actually is able to sell/redeem shares:

"Mr. Ackman and other members of the management team and officers of the Investment Manager have each agreed with the Company to a lock-up of ten years commencing from October 1, 2014, of their aggregate Management Shares, less amounts (i) attributable to any sales required to pay taxes on income generated by the Company; (ii) required to be sold due to regulatory constraints, including, without limitation, sales required due to ownership limits; or (iii) attributable to sales following separation of employment from the Investment Manager. Under the terms of the lock-up arrangement, shares subject to lock up may from time to time be transferred to affiliates, provided that the transferee agrees to be subject to the remaining lock-up period."

Interestingly, Pershing Management was issued 199,127 additional PSH shares in August, which disappeared again in September. This is yet another anomalous synchrony that overlaps with their NAV reporting change. It's anomalous because from October 2014 through July 2015, the number of PSH shares held by management stood completely flat from month to month at 8,500,796 shares. At the end of July, Pershing was crushing it and was just shy of $20B AUM, so it makes sense why in August the number of management shares increased to 8,699,923 although at the end of September, when it modified NAV reporting, it had decreased back down to 8,500,796.

199,127 shares doesn't seem like a lot until you look at PSH's trading over the period. During the month of September, PSH averaged 211,754 shares traded a day. The reduction by management, if they'd sold to the market, equates to 4.5% of all volume for the entire month of September. It's not like Management reduced their count by selling on the open market, but open market perspective is nice when you consider that the shares management redeemed, directly derive their value from the NAV's of the public vehicle. I think it is a reasonable conclusion to surmise anyone planning to redeem at the end of the month could be motivated to do what they could to protect the net value of that redemption, even though the total value of that redemption was only $4.9M. Talk about managing to the share price.

Any of these risky moves could be motivation for the reporting changes, but with one quarter to make up 11.2%, just to get back to zero, Ackman and Pershing Square Capital Management seem to be gunning for even more risk. As one investor put it to me, 'Ackman may have become the worst risk manager around. Here you are with tens of billions in assets, collecting hundreds of millions of fees annually on a highly concentrated portfolio, which is risky enough on it's own, and significantly negative for the year, with regulatory scrutiny all over you, but you still risk all of that by hiding your NAV to support a $5M management redemption...it's appalling.'

Whether Pershing was actively manipulating the PSH price with NAV report modifications to support management's own redemptions remains to be seen, but as that same investor expressed to me, 'it demonstrates extremely poor judgement, or taste or both.'
Posted by TheSkeptic21 at Monday, October 12, 2015

TheSkeptic21
GENERAL DISCLAIMER The content contained in this blog represents the opinions of TheSkeptic21. TheSkeptic21 may hold either long or short positions in securities of various companies discussed in the blog based upon TheSkeptic21's opinions. The commentary in this blog in no way constitutes a solicitation of business or investment advice. In fact, TheSkeptic21 adamantly believes that you should ignore the views and opinions expressed in this blog and go out and do your own research and form your own opinions. TheSkeptic21's views and opinions should not be relied upon in making investment decisions (or any other decisions) in any way shape or form, ever. Sometimes I am wrong and sometimes I miss data points that would change my opinion, therefore you should know my opinion may be REALLY WRONG. The opinions expressed herein is intended solely for the entertainment of the author. If you too are entertained, so be it.