You might suppose that MiMedx, the Marietta, Georgia-based regenerative tissue developer squarely in the crosshairs of everyone from the Department of Justice, the Department of Veteran's Affairs, the Securities and Exchange Commission, health insurers, and short-sellers couldn’t possibly have anymore controversy surface. 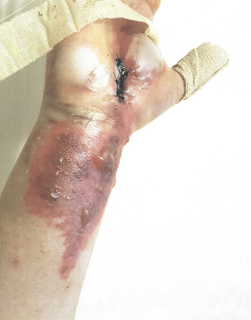 Recently a civil lawsuit was initiated in Fairfax County, Virginia that suggests that MiMedx isn’t leveling with both consumers and a key regulator over the safety of their flagship products.

The complaint is pretty straightforward: a patient named Victoria Wen-Platt claims her routine surgery for carpal tunnel syndrome was marred because of a severe reaction to the EpiFix her surgeon used to minimize scar tissue. What is not so straightforward, however, is why the Food and Drug Administration has no record of this adverse event and others.

In response to a Freedom of Information Act request, the FDA performed an exhaustive search of adverse events potentially caused by MiMedx products spanning over a seven year period that ended in February 2018. As it turns out, while the FDA does have records of adverse events related to EpiFix and AmnioFix, MiMedx self-reported those events to the FDA and determined they were unrelated to their products.

One particularly disturbing report indicates that MiMedx knowingly processed tissue that cultured positive for coagulase negative
Staphylococcus and Staphylococcus saccharolyticus. Coagulase-negative staphylococci (CoNS) are part of the normal bacteria typically found on human skin and are often contaminants of clinical specimens. Usually CoNS aren't particularly virulent, although their prevalence has contributed the CoNS becoming agents of more clinically significant infections. Although CoNS rarely cause sepsis, they are one of the most common nosocomial infections and are often resistant to multiple classes of antibiotics. The report MiMedx submitted to the FDA details that a patient who received 50mg of AmnioFix injectable and an EpiFix graft on his right foot in July of 2017 later had his toe amputated.

“Hospital culture was positive for Staphylococcus aureus (gram positive cocci). This is a different species than the MiMex pre-processing [(b)(4) redacted] for the grafts which indicated Coagulase Negative Staphylococcus (for donor [(b)(6) redacted] and Staphylococcus saccharolyticus (for donor [(b)(6) redacted]. As the species are different, there is no correlation between the growth on the incoming tissue and that on the wound culture at the hospital. Because of the investigation (above and in B.6) and asence of findigs, and the fact that the tissues in question were terminally sterilized, we have determind that it is highly improbably that the adverse reaction was caused by the tissue. However, as the event did involve and infection which necessitated medical intervention (antibiotic treatment and toe amputation), Mimedx has determined that, in the abundance of caution, the event will be reported to the FDA under 21 CFR 1271."

Although the patient's infection was determined to be caused by Staphylococcus aureus, I'm surprised that MiMedx's quality control systems would allow this tissue to be processed to begin with. MiMedx notes that the tissues in question were terminally sterilized, however in the FDA's current risk-based approach to biopharmaceutical quality it seems unnecessarily reckless to allow harvested tissues that culture positive for known pathogens to move through MiMedx's manufacturing processes and ultimately on to distribution. The report further indicates that a total of 56 grafts were distributed from the same lots, however the report does not indicate that these tissues were actually utilized.

MiMedx and I can disagree what constitutes "quality by design", nonetheless the severe reaction that Mrs. Wen-Platt encountered is clearly not listed in the MEDWATCH reports which the FDA provided in response to the FOIA request. One simple and plausible explanation is that the reaction occurred outside of the responsive period that the FDA was asked to query. Or that the reaction was reported to the company after the FDA closed out the FOIA request. Another is that the company was never aware that a recipient of one of its products had such a severe reaction.

I believe that the reaction was reported to the company and the company did not report the event to the FDA.

Wen-Platt's severe reaction occurred in January of 2017, within the responsive time frame of the FOIA request. Additionally, I’ve been told by a source familiar with the matter that MiMedx was indeed notified of the adverse event within six months of its occurrence. The adverse event was initially reported to a Regional Sales Director and then quickly elevated to at least one member of MiMedx's senior management team, Dr. David Mason, the Vice President of Medical Affairs for Clinical Practice.

Although the patient's name would have been redacted in the documents provided by the FDA, there is simply no record that comes close to matching her reaction. More troubling still is that as referenced above the person familiar with the matter indicated there are more adverse events related to MiMedx products which have not yet been publicly disclosed.

Dr. Farrer, who was also listed as a member of MiMedx's VLU Study Group, was indicted in May of 2018 by the U.S. Attorney’s Office of the District of South Carolina for Conspiracy and Bribery with respect to her financial interest in MiMedx while a physician at the Dorn VA. Although Dr. Tettelbach revised his paper almost 2 months after Farrer's indictment, Dr. Farrer's involvement in the study is not disclosed anywhere in Tettelbach's publication.

The study authors do disclose however that out of 126 patients randomized in the clinical trial, three experienced adverse events that were considered to be possibly related to the product.

Similarly to Mrs. Wen-Platt's reaction, these adverse events are also conspicuously absent from the MEDWATCH reports provided by the FDA, despite federal requirements to report such adverse events.


I often wonder why the FDA hasn't yet launched an enforcement action against MiMedx. If you read the FDA's January 2016 Establishment Inspection Record for MiMedx, or the FDA's untitled letter they sent to the Mid America Stem Cell Institute in July of this year, it's a bit shocking to see that the agency has not recently sent a similar letter to MiMedx, particularly since MiMedx has been on the FDA's radar since August of 2013. 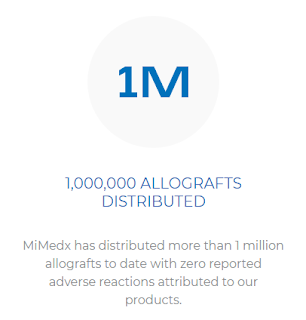 The following screenshot was taken from MiMedx's website today. MiMedx is claiming that they have distributed more than 1,000,000 allografts to date with "zero reported adverse reactions attributed to our products." Although there have been a lot of changes in MiMedx recently, whether or not you think MiMedx's current woes are solely related to actions taken by former leadership, MiMedx is *currently* making materially false statements with respect to their products' safety and use.

It's possible that the FDA will take action against MiMedx. It's also possible that the FDA will let MiMedx run out the remaining 28 months* of their enforcement discretion based a lack of safety concerns and also based on the company's Investigational New Drug Applications that will support their planned Biologic License Applications.
*(The final guidance issued by the FDA in December of 2017 for Human Cells, Tissues, and Cellular and Tissue-Based Products noted that the agency would "exercise enforcement discretion under limited conditions with respect to the investigational new drug (IND) application and premarket approval (biologics license application (BLA)) requirements, for certain HCT/Ps" for a 36 month period.)

Setting aside the allegations of fraud and kickbacks, to say nothing of the absence of six years of reliable financials for this publicly traded company, if MiMedx was counting on the FDA's enforcement discretion it's quite possible that discretion will evaporate in light of these previously unreported safety concerns.

(Note: I emailed both Dr. Mason and Dr. Tettelbach seeking their comment, but had not received a response from either at the time of publication)

Posted by TheSkeptic21 at Friday, August 24, 2018 No comments: Links to this post

TheSkeptic21
GENERAL DISCLAIMER The content contained in this blog represents the opinions of TheSkeptic21. TheSkeptic21 may hold either long or short positions in securities of various companies discussed in the blog based upon TheSkeptic21's opinions. The commentary in this blog in no way constitutes a solicitation of business or investment advice. In fact, TheSkeptic21 adamantly believes that you should ignore the views and opinions expressed in this blog and go out and do your own research and form your own opinions. TheSkeptic21's views and opinions should not be relied upon in making investment decisions (or any other decisions) in any way shape or form, ever. Sometimes I am wrong and sometimes I miss data points that would change my opinion, therefore you should know my opinion may be REALLY WRONG. The opinions expressed herein is intended solely for the entertainment of the author. If you too are entertained, so be it.